Lagos State Development and Property Corporation (LSDPC) has sealed a joint redevelopment partnership with Afriland Properties Plc, a private developer, to turn the former Falomo Shopping Complex into a premium sky-high real estate that will enhance the socio-economic outlook of the neighbourhood.

On Friday, the two partners set to work, flagging off Falomo towers, a major urban renewal project that will restore the aesthetic landscape of Falomo, the commercial suburb of Ikoyi in Lagos State.

Governor Babajide Sanwo-Olu flagged off the construction work to situate Falomo Towers on 11,950 square metres of land, in a way to offer a blend of green amenities that will promote quality living.

Afriland Properties Plc is a subsidiary of Heir Holdings, owned by the foremost entrepreneur and banker, Tony Elumelu.

Sanwo-Olu, at the sod-turning ceremony held at the project site, said the construction flag-off ended a decade-long discussion with the developer to revive the project and build iconic towers that would turn around the fallow land for the benefit of the public.

The Governor said the project was another milestone achieved by his administration to renew urban amenities, stressing that the strategic implementation of the Lagos Masterplan had been dependent on the Government’s ability to forge workable partnerships between the public and private sectors. 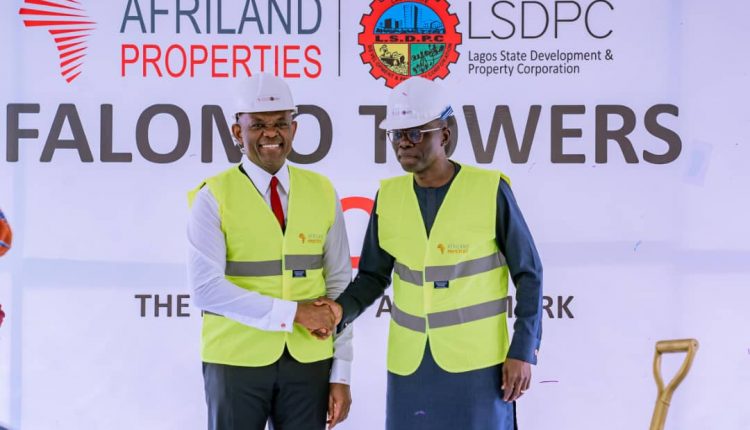 He said: “This is a phenomenal project that will bring back the lost ambience of Ikoyi. When this partnership was initiated 10 years ago, I was the Managing Director of LSDPC. It is interesting to note that we’ve all gone through arbitration but we didn’t throw a wrong punch. We agreed this project must not be thrown away. Today we are making a transaction that is bigger and better than what was initially proposed 10 years ago.

“This testifies to the uniqueness of public and private sectors in ensuring things can be made a lot better when we sit and agree. This is a clear example of what the Public Private Partnership (PPP) model is out to achieve when partnerships and collaborations are pursued and implemented with seriousness. When we put our minds of possibilities to ideas, great things happen. This aptly describes the story of today’s flag-off of the construction of Falomo Towers.”

Sanwo-Olu described Afriland Properties as a tested, trusted and reliable developer, saying the Corporation had found the right partner for the redevelopment project.

The Governor reiterated that the State Government would remain committed to ensuring the investors get full value for their investments while promising to continue to pursue business environment reforms, including automation of land and property records to scale up transparency and efficiency that catalyse sustainable investments.

Element said the partnership was another testimony to the Lagos State Government’s belief in the private sector as a key development driver in the State, praising the Lagos political leadership for setting the pace of private sector inclusion in governance. 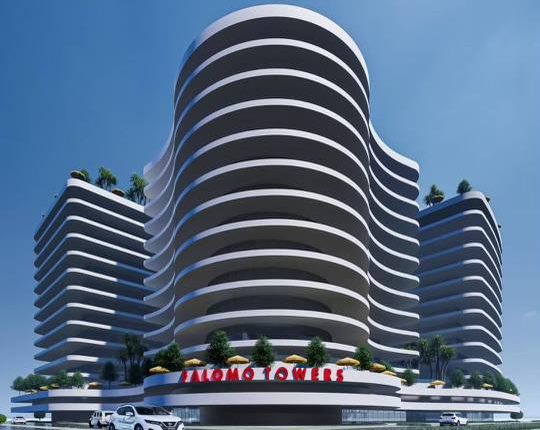 For surmounting obstacles that delayed the take-off of the partnership, Elumelu said Lagos remained the most hospitable environment to investors seeking profitable returns on their investments.

“For the private sector to do well, the political leadership must create the right environment. Lagos has set the pace in this direction. This partnership is a celebration of dialogue and this makes Lagos remain the most hospitable environment for investors.”

LSDPC Chief Executive Officer, Hon. Ayodeji Joseph, said the project site evoked memories of a glorious past for Island dwellers in the 1970s, noting that the Corporation took an informed decision to turn around the site by building residential apartments to provide additional accommodation to the growing middle class, business professionals and the swelling rank of young citizens.

He said: “Over forty years down the line, the Corporation in its decision to renew some of its facilities has deemed it fit to redevelop the site of the shopping complex, taking into consideration the realities of today’s needs as well as the environmental impact implications.

“To achieve this purpose, we decided to mobilise finance from the private sector. This decision will free resources that could otherwise be tied down to this project, for other pressing needs. In addition, it will allow the project to benefit from the competitive efficiencies for which the private sector is better known.”

Chief Executive Officer of Afriland Properties, Uzo Oshogwe, noted that the redevelopment project was a revival of a landmark, saying: “With the project, we tend to give Ikoyi back its aesthetic landmark

She said the iconic project would enhance and beautify the Ikoyi skyline, adding that the partnership would be creating economic opportunities and social wealth that would transform the state and the country.

The project development is expected to be completed in 30 months.