Arsenal returned to the top of the Premier League table as Gabriel’s close-range finish gave them victory away to Chelsea at Stamford Bridge.

Gabriel pounced to steer the ball over the line in the 63rd minute, after the hosts failed to deal with Bukayo Sako’s corner from the right wing, to give the Gunners a deserved lead.

They had created the best chances when it was goalless but Gabriel Martinelli curled a shot over the crossbar and Gabriel Jesus failed to hit the target with a diving header when unmarked.

Chelsea, with ex-Arsenal captain Pierre-Emerick Aubameyang failing to make an impact against his former side, struggled to create clear-cut chances and are now without a win in four Premier League matches.

Arsenal lost top spot on Saturday when 10-man Manchester City beat Fulham 2-1 thanks to Erling Haaland’s winning penalty in the fifth minute of injury time, but this win takes them two points clear of Pep Guardiola’s side after 13 matches.

For Arsenal, this was a chance to show their title credentials as they look to become English champions for the 14th time – but the first since 2003-04 when their ‘Invincibles’ went through an entire league campaign without losing.

The Gunners, without a top-four finish since 2016, have beaten Tottenham and Liverpool at home this season, although they tamely lost 3-1 at Manchester United in September.

But they started brightly at Stamford Bridge as Gabriel headed wide inside the first two minutes.

Ben White pulled a shot wide from 15 yards, Martinelli curled an effort over the top and Jesus had an effort superbly blocked by his Brazil team-mate Thiago Silva.

However, Jesus should have done better with a diving header when free at the back post and found by Martinelli but could not hit the target from eight yards. 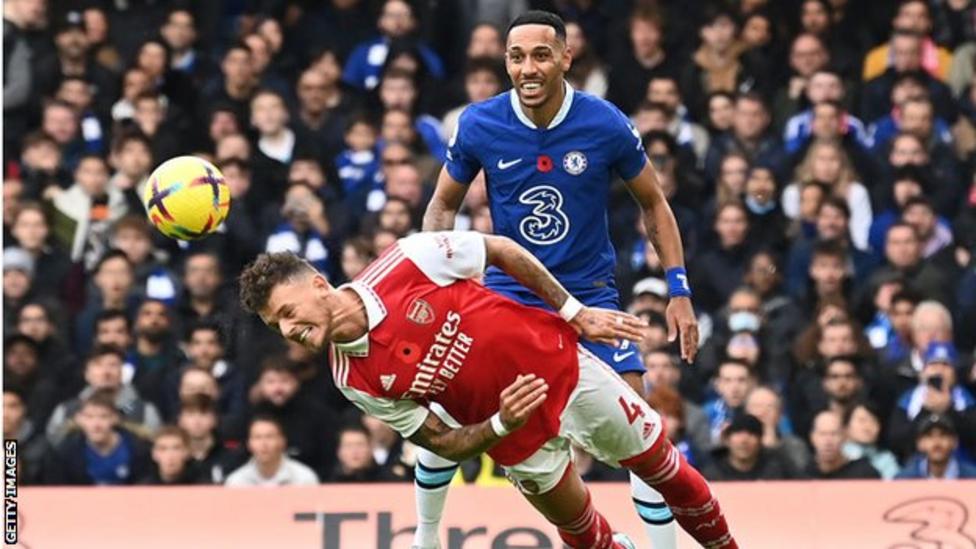 Gabriel Jesus
Gabriel Jesus has not scored in his past five Premier League games for Arsenal after five goals in his first eight league matches of the season
But Jesus was involved in the build up to Arsenal’s goal as he gained possession from Silva and shot at goal, with Chelsea goalkeeper Edouard Mendy sending it behind for a corner.

England international Saka swung the ball in and no Chelsea defender could clear before Gabriel volleyed it in from only a couple of yards out for a massive three points for the Gunners.

Aubameyang fails to shine against former side

This was Aubameyang’s first appearance against his former side, but the Gabon striker had a disappointing afternoon, only touching the ball eight times.

He had joined Arsenal from Borussia Dortmund in January 2018 for a then club-record fee of £60m and spent four years with the Gunners, scoring 92 goals in 163 appearances in all competitions, including both goals in a 2-1 win over Chelsea in the 2020 FA Cup final at Wembley.

However, he was stripped of the Arsenal captaincy by Mikel Arteta in December 2021 following “disciplinary breaches”, before he left for Barcelona on a free transfer and then moved to Chelsea in September.

He would have been keen to impress, but only touched the ball four times in the first half as he was excellently contained by Arsenal’s central defensive pairing of Gabriel and William Saliba.

Indeed, Aubameyang’s only real involvement in the opening 45 minutes saw him pick up the game’s first yellow card for a mistimed sliding challenge on right-back White.

Chelsea’s Pierre-Emerick Aubameyang (in blue) spent four years at Arsenal, winning the FA Cup and playing in both the League Cup and Europa League finals
Despite the best chances in the first half falling to the visitors, the hosts did register the only attempt on target – Kai Havertz weakly shooting at Aaron Ramsdale when played in by Raheem Sterling from the right wing.

Aubameyang continued to be on the fringes and had only added another four touches of the ball before he was taken off after 63 minutes.

His replacement Armando Broja also failed to have a shot on target on a disappointing afternoon for a lacklustre Chelsea.

Twitter Users Can Soon Get Blue Check For $7.99 Monthly Fee