Rise of The Saints…A Breath of Fresh Air

October is here and Ninth is the date when Teleola Kuponiyi, Deyemi Okonlawon, Rachel Oniga, Tina Mba, Peter Fatomilola, under the directorship of Samuel Olateru head to the cinema with the Rise of the Saints.

Going to the cinema now will do two things to Nigerians. The have regained freedom from Covid-19 that held the multitudes under lock. Second, at least we will experience laughter, replacing the tears that the dreaded virus has brought to our eyes while mourning our loved ones who were snatched away by the cold hand of Covid-19.

Rise of the Saints tells the story of a young music artist who finds himself at a crossroads when he realises that his existence was prophesied and the prophesy places an unimaginable responsibility at his feet. However, there is a villain who would want nothing more than to see him perish.

Inspired by the story of Moremi Ajasoro – Princess of The Yoruba Peoples, and managing to fit in several other themes into its one hour thirty minutes runtime, Rise of The Saints seems to have choked itself by cramping so many stories into one movie. On the bright side, we are seeing a Nigerian filmmaker, who has many fresh ideas and stories to tell, try to flood our senses with his new and exciting ideas. The truth is, I would take this any day over the repetitive themes of love, heartbreak, blood money, and political power tussles that Nollywood has forced Nigerian moviegoers to consume for a long time. This is a breath of fresh air.

Rise of The Saints is an epic fantasy that spins and further develops the legend of Moremi Ajsasoro, warrior Queen of Ife who delivers her people from the terrors of a neighbouring tribe. In the present, her son, whom she sacrificed to the gods for help is manifest in Luke “Teleola Kuponiyi”, a young aspiring music artist. Orphaned at birth and raised by his aunt, Luke is suddenly plunged into a battle of two worlds; of light and darkness. He joins forces with The Saints, a group of people charged with the duty of protecting the legacy of Moremi, and together they must employ all their wits to defeat the ferocious warlord, Jagan.

The film manages to incorporate contemporary issues such as the dangers of social media, and response to disease outbreaks in a closely connected society, considering the response of the Nigerian government to the Ebola outbreak, Lassa fever outbreak, and the novel coronavirus, albeit to varying levels.

For his first feature-length film, considering the budget available to him, the director Samuel O. Olateru, I would say, did a stellar job of explaining the events in the story through a third-person omniscient point of view. He utilised numerous film styles without making any scene too jarring. With not so great framing and camera movement, the viewer might struggle with some of the scenes in the movie but I assure you it did not detract too much from the emotions each scene looked to portray.

Editing in this movie is top-notch and the colour grading was excellent. It flowed smoothly from scene to scene. The opening montage did a whole world of good explaining the legend of Moremi to any viewer the story might be new to and it gave the movie a feel of a Hollywood blockbuster centred around greek mythology.

Another thing that drew my attention is the background music. A mix of old ijala afro-centric tunes infused with modern trap beats and instrumentals. The intentional use and creation of the sound score are quite laudable. 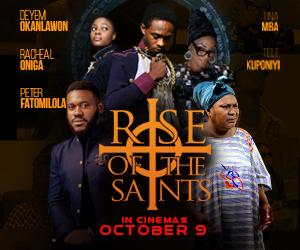 Another thing that stands out is that the writers, instead of using a vague spiritual ploy as the vehicle to carry out the villain’s diabolical plot, chose to use biological weapons to create an easy-to-relate conundrum and an understandable climax. This move is commendable. Many a Nigerian film critic and regular film consumer disapprove of the sheer volume of films that get released every year with a heavy influence of African black magic infused in their plot structure. This seems to be a conflict of truths because filmmakers try to mirror the society with their stories but critics and consumers argue that these things don’t feature in our everyday life as much as Nollywood makes it out to seem. Rise of The Saints thus managed to walk that thin line by reducing its appearance through substitution.

In conclusion, this film is definitely one to look out for and see in cinemas. From viewing the preview copy, I got the feeling that the sound would be an experience in itself if you’re hearing it from those HD surround sound speakers. As I mentioned earlier, this film is a breath of fresh air. I appreciate that somebody has thought to explore a deeply traditional story and made a movie out of it. Some of the biggest Hollywood blockbusters have come from such myths and legends, think – Troy, Thor, Hercules, Alexander, 300 – the list goes on and on. It does try to do a lot, but it is one that would benefit from a sequel or an entire franchise of up to seven parts. Did I hear somebody say Star Wars?

Rihanna To Return to The Stage For Super Bowl Halftime Show

In the wake of rumours that he is ill, Tinubu returns from the UK