Premier League: A Season Like No Other, But Some Things Won’t Change – Alan Shearer

The winter World Cup means this will be a Premier League season like no other, but one thing will be the same: it’s between Manchester City and Liverpool for the title.

When I look at the group of teams immediately below them, Tottenham and Arsenal have both improved a lot, but I still don’t think it will be enough for either of them to maintain a challenge.

There’s a gap between the top two and the rest, not only because of the quality that we know City and Liverpool have got, but also down to their belief and a relentless drive for success that stems from their managers.

City, who have been champions in four of the past five years, are going for a hat-trick of titles. That’s an achievement only Manchester United have managed in the Premier League era, which tells you how difficult it is, but it’s in Pep Guardiola’s sights now.

Liverpool will have been disappointed to only end up with two domestic cups last season from a campaign that promised so much, but we know exactly how they are going to react.

Even just watching them in the Community Shield and seeing the body language of Jurgen Klopp and his team in that game, you can see they are up for the fight again.

Only one point separated them in the end last time and it is going to be incredibly tight this season too.

If I had to choose a winner now, it would be City – just about – because of Erling Haaland.

They won the title without him last year, and without using a real centre-forward. Now they have got one who could and should score a minimum of 30 goals this season.

Haaland missed a big chance against Liverpool on Sunday, but so what? All strikers miss sometimes.

He is going to get many, many more chances for City because of the quality of their players and the service they will give him.

Yes, City might have to play slightly differently with him in their team, or he might have to adapt to the way they play, but that’s not a problem either way. I actually think we will see a bit of both happening.

Liverpool also have a new-look forward line with Sadio Mane leaving and Darwin Nunez joining from Benfica, but I don’t think their attack will be any less potent than last season.

A big reason for that is Mohamed Salah signing a new contract, which is absolutely huge for them and will be a big weight off his mind too.

We might even see Salah playing better now, which is a frightening prospect for Premier League defences, but I still think City will have the edge come the end of the season. 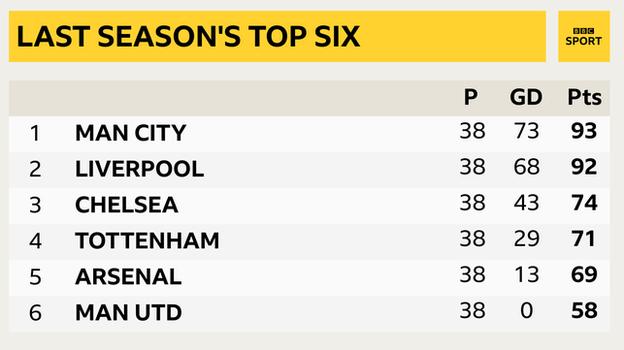 Out of the other teams in last season’s top six, Tottenham are probably the only ones to have the same kind of firepower as Liverpool and City.

Spurs have backed their manager Antonio Conte in the transfer market – in January and again this summer – and, with his experience and determination, I am expecting them to have another good season after finishing fourth last time.

Arsenal have bolstered their attack too and Gabriel Jesus is a very clever signing. Manager Mikel Arteta knows him from their time together at City and I think Jesus will flourish now he is the main man and leading the line rather than looking around and not knowing whether he is a centre-forward or not.

Right now, though, Chelsea just don’t carry the same attacking threat. They were really disappointing in the league last year, as was their £97m striker Romelu Lukaku.

Lukaku has left on loan now and, although Raheem Sterling is a good buy and Carney Chukwuemeka is an exciting prospect, I still think they are three or four signings away from challenging for the title again. Without a doubt, centre-forward is one of the positions where they are short, with three weeks to go before the window closes.

Man Utd target is to get near top four

Manchester United have also got a lot of work to do in the transfer market before they can be classed as contenders again, and they are coming from even further back than Chelsea after finishing sixth last season.

United have got a new manager with new ideas but the squad needs strengthening and, unless that happens, Erik ten Hag might have to use players like Anthony Martial who, last season, were regarded as not being good enough for them.

There are other problems too. The Cristiano Ronaldo situation has turned into a bit of a mess and it can’t help Ten Hag to have to continually deal with questions about his future.

It’s also a big season for Marcus Rashford at United after what happened to him last year – he has a point to prove and, from an England perspective, I hope he can rediscover his best form.

But I just don’t see United challenging for the title – their aim is just to try to get somewhere near the Champions League places.

Newcastle not ready to challenge yet

I’d love to say I think Newcastle will be fighting it out with Manchester United for a place in the top six, but I don’t quite see that happening yet.

Eddie Howe has already done a great job to turn the club around since he was appointed as manager in November and now my hope is that they will be challenging for seventh, eighth or ninth place, which I think is realistic with the squad they’ve got at the moment. They finished 11th last time, and were only three points off eighth place.

Ano her signing or two could make the difference there, especially up front – Chris Wood arrived from Burnley in January but so far he is the only striker Howe has signed. With Callum Wilson’s history, you would think at some stage he is going to get another injury and they will need some more attacking options.

Whether they go for a striker or a different type of forward player – there have been reports about bids for Leicester’s James Maddison and Harvey Barnes – it is definitely in that department that they need to strengthen.

It already feels strange that the domestic season will stop in mid-November for six weeks, but I don’t think we know yet how holding this World Cup in the middle of the campaign will affect each Premier League team, or England’s prospects in Qatar.

Will it hinder the clubs who send more players, or fewer? Could it help England because our players are not coming off the back of a long, hard season?

We can only guess, because it has never happened before, but it will definitely change the way the title is won.

In the past couple of years, we’ve seen City start slowly then really hit their stride in November or December and go on ridiculously long winning runs. They will have to time it differently this term, and it will be interesting to see where teams are at when the Premier League pauses after 16 games, and then how quickly they can get going again.

It is the same for everyone though, and I see the schedule as something to look forward to, rather than complain about. I also think there is a real optimism about our chances after Gareth Southgate’s side reached the semi-final and final of their last two major tournaments.

The Lionesses went and won this summer’s Euros, which was just incredible to watch. The England women’s team were outstanding from start to finish and showed everything you need to do to go the distance in a major tournament.

Now it’s over the men to try and match that!

FG Working On Measures To Protect Schools Against Attacks

‘In Case You Don’t know, I’m Richer Than Wizkid And…